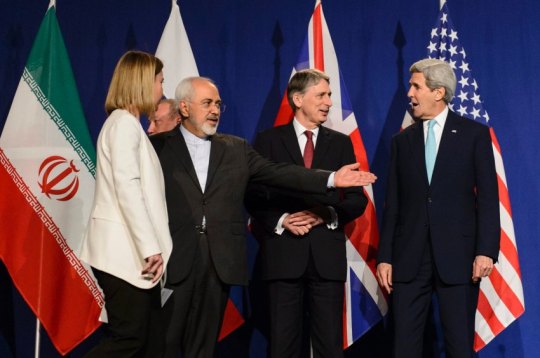 The framework agreement reached, calls for the removal of UN imposed sanctions against Iran while the issue of other sanctions will be discussed within bilateral formats, e.g. Iran – USA.

“I am convinced that if this framework leads to a final compromise deal, it will make our country, our allies, and our world safer,” US president Barack Obama said on Thursday.

Iran’s president Hassan Rouhani said on Friday: “I, hereby, declare in a straightforward manner now that enrichment and all nuclear-related technologies are only aimed at Iran’s development and will not be used against any other countries and the world has acknowledged very well today that Iran is seeking peaceful purposes.”
Both president Rouhani and US Secretary of State, John Kerry, said that the sanctions will be lifted after a final deal will be reached. However, there seem to be a difference of interpret of the framework, as Iranian president said that all the UN and economic, financial and banking sanctions against Iran will be annuled the moment a final nuclear deal between Iran and the six world powers goes into effect while John Kerry stressed that the removal of the sanctions will come in phases.
Drafting of the deal will start soon to prepare the Joint Plan of Action by the July 1 deadline.

Federica Mogherini, EU foreign policy chief, at a joint press conference with the Iranian foreign minister Mohammad Javad Zarif said :
“The European Union will terminate implementation of all nuclear related economic and financial sanctions. And the United States will cease the application of all nuclear related economic and financial sanctions simultaneously either IAEA verified implementation by Iran of its key nuclear commitments.”
Agreements on the Islamic Republic’s nuclear issue would be endorsed by a new UN Security Council resolution.
According to The Joint Comprehensive Plan of Action (JCPOA) parameters as published in the Fact Sheet released by State Department, Iran has agreed on various adjustments and reductions of its nuclear program and inspections of IAEA.

Opposition to the agreement

Not all the western officials consider that the agreement is a victory of sober diplomacy and beneficial for peace.
On the opposite side of the porgressive public opinion in the whole world where the deal is considered historic and decisive for the desired peace, balance and stability in the region of the larger Middle East area, there are the ultra-conservatives in US and their protégé Netanyahu.
They have already delivered rhetoric of subversion; they present the framework as a “triumph” of Iran against American allies (Saudi Arabia and Israel) and characterize “theater” the statement of president Obama.
A provocative statement was made on Tuesday by Defense Secretary Ashton Carter who said that even if a deal was reached, the US reserves the right to bomb Iran.
Senator McCain (R-Az), also expressed his “concerns”: “President Obama is hailing this framework as something that could enhance the prospects for peace in the Middle East. For those of us who have looked forward to bombing Iran for some time now, that would be a doomsday scenario.” (…)

No one mentions the recent release of Pentagon’s declassified reports of 1987 which admit that Israeli scientists were capable of producing a hydrogen bomb by that time. The declassification is named by israeli media “Obama’s revenge” for the speech of Netanyahu against Iran in Congress where he was invited by Republicans.

Although trust is difficult to be established after more than 35 years of mutual “demonisation”, Iran is expected to play an important role in the -always- troubled region of Middle East and its contribution (diplomatically and politically) will be valuable both for the West and for the neighbor countries.
US have multiple open fronts worldwide militarily, economically and politically (Russia, Venezuela, ISIS, Ukraine) and the period until the, hopefully, final deal will probably offer them a “breath”.

What is most important after this great step is the problem of the global nuclear energy as a whole and as a danger for humanity, especially in the face of the threat by ISIS and their branches in many countries.